I really fucking hate my job. I’m really irritated with my life in general right now. At the back of my mind, I am constantly also telling myself that being able to brood about trivial matters like this is something I should be thankful for, since, as we all know, everything could always be so much worse.

So why is it when I’m most in need of venting about all the shit I’m wanting to rage about, I hole up like a dead barnacle and go radio silent?

Short answer is, I don’t know.

I suspect there is a deep-seeded element that tells me it’s impolite to bitch as often as I have been and I should shut up until I have something more pleasant to say or decide to disclose a humorous moment of my own ridiculousness rather than the trite bullshit I have going on currently. But then I argue again that doing so defeats the entire purpose of raw honesty. That not disclosing my internal struggle goes against the very fabric of this blog, the desire for betterment and peace through unbridled discussion. I’m also a firm believer of karma and feel like putting all the negative shit I’m dealing with in my mind out in the open is somehow creating a surplus of the negative and it will just come back on me tenfold. Then I double back and think that purging the negative is part of the cleansing process and I’m merely breeding new bile by remaining silent.

I’ve got a lot of personalities in my head that just need to shut the fuck up. It staggers me the ability I have to argue myself into absolute circles. Dogs chasing their own ass give up faster than I do. It’s no wonder I’m usually rendered completely immobile whenever I must come to a decision about something in my life. And usually, it seems, no matter what choice I make… it usually works out badly.

Ironically, I am wonderfully proactive and downright pushy when it’s someone else. Why am I like that? I can see the steps to their goals so easily. Three steps this way, one dodge to the left, a trot up and voila.

However when it comes to my own issues, I’m more like:

When I’m trying to figure out the steps to get to where I feel would be a better direction, it always seems to work like: 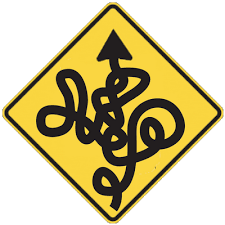 I know I’m not the only one who has ever felt this way, which is most of the reason I figure I shouldn’t bother people with it. My god, what a fucking idiot I am! Now I have a headache too… wait a sec…

Ok. it’s amazing when you can make a snack out of ibuprofen and zantac.

Let’s get on with it… I’ve been doing pretty much the same essential job type for well over ten years. It’s boring but I’m good at it and it’s the type of job that is needed at just about any mid to large company in some form. It’s your typical 8-5 (when dafuq has it ever been 9, Dolly, when!?). Usually, my job doesn’t bother me. For the peace of mind of a steady paycheck, I go in every day, do my shit and leave. However, I’ve only been with this particular company a couple years. At first, it was good environment-wise, although the benefits are pretty bad. The people I was exposed to were all really awesome and everyone was on their first date behavior. Over time, a few of those outside of my department are showing more and more that they are merely adult-sized children. They accuse my department of incompetence or of just flat-out refusing to do our jobs and when they don’t get the answer they want, they find someone over our heads to complain to in order to make things go their way. Personally, I’ve like to give them all pacifiers this Christmas and toss them in front of a bus.

This company has no value… actually it has negative value. Yes, its making money but it would take just one big lawsuit and the doors would have to shut. I’m not allowed to tell anyone that. When the economy crashed several years ago, my company made deals with every devil that could get them another week of payroll and electricity to stay running. This is the mess that my department has to resolve, without discussing it with anyone outside our department because it would hurt morale.

What about my morale? I find myself wishing for that one big lawsuit to close the doors for good because that is the only thing that brings a smile to my face.

I spend half of my day dealing with people we cannot pay right now, comforting them, assuring them, giving them timeframes and making promises… only to be told I don’t communicate enough, usually by people who aren’t my fucking boss nor in my department, but for some reason I’m supposed to give a shit about their opinion. Their behavior is unfortunately rewarded, so the cycle continues.

I was hired to do quite a lot more than I am currently able to do, because “to communicate more” means I have to take from everything else… even staying late and bringing in Spawn to sometimes help, for free, with the remedial bullshit isn’t helping. When I asked if we could maybe interview a kid I knew as a summer helper, I was redirected to the owner’s useless kid, who the last time was there to help us, worked a solid hour and 45 minutes over three months and spent most of it on their phone.

It finally dawned on me that the only reason I’m really here is to play the punching bag. Much like we vote for a president to take the vast array of PR shit the House and Congress are pulling, I’m the face given for my co-workers to toss pies at in order to feel like they’re effective badasses.

And I cannot do a damn thing about it.

My savings was sucked dry by a car that is getting old and needing more and more work and a piece of shit service guy who couldn’t do his job, over several visits. Spawn is staying home for much of the summer because I just didn’t have it to spend as much on their summer program.

My home is a dump and I often look over my cleaning supplies and wonder what combination might make the whole lot go up in flames.

I want to move.

Can’t afford that either.

I’ve also been throwing money away by just renting these past ten years or so. I could have had a house 1/3 paid off. It just doesn’t end the idiocy I cause in my own life.

I rent because I don’t want to stay in this state. I can’t afford to move. I’m ready to hock, sell, smash or donate most of the stuff in my house. I can feel myself itching to just take off, knowing fucking well that… based on past experience… I will break down in the middle of nowhere with nothing to bail myself out on.

I want to own a coffee shop, preferably one I can live above because I’m just that fucking lazy.

I want to be on the west coast.

I want to dictate my own fucking hours, and make shit that people buy.

I don’t want to be beholden solely on a shitty company for my personal well-being.

And the more I have one soul-crushing birthday weigh in after another, I am constantly reminded of how little I have done with my life, how much potential I will never regain, how meaningless the years have been, how little I’ve put out in the world that I’m proud of outside of my kid… in fact, that’s it.

Then I wonder what the fuck I’m bitching about.